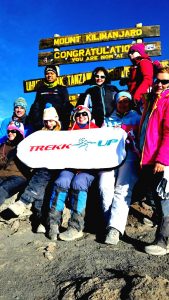 Marangu Route Mount Kilimanjaro Climb – The main tourist route and by far the most popular route and some claim the easiest route to Uhuru Peak. The 5-day option which is available on this route makes it the least expensive route on the mountain. A 6-day option with an extra day of acclimatization is however also available. This is the only route which provides comfortable sleeping huts, equipped with beds and mattresses at every camp site. Mineral water, soft drinks, beer and chocolates are also sold at every camp. All the camps on this route have radio contact with the Park Headquarters.